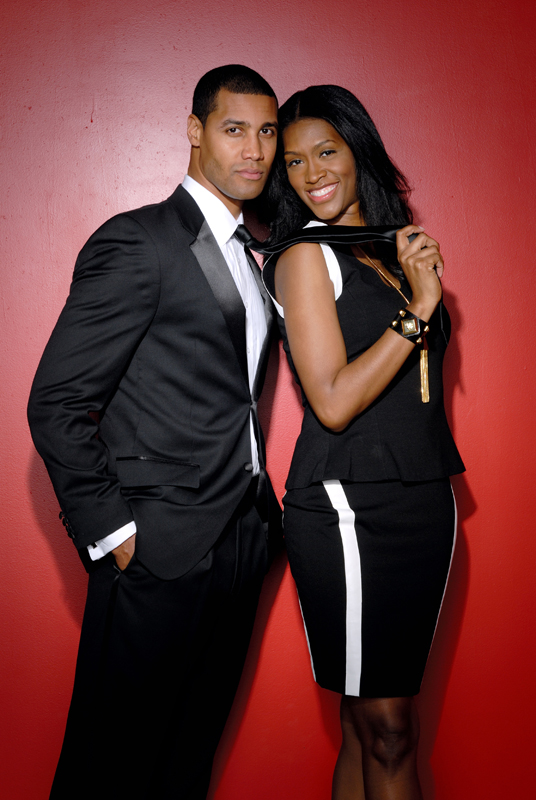 Ronnel and Tinika Blackmon met while touring with Ebony Fashion Fair as part of the modeling roster. From 2002 to 2008, they collected life lessons that would define them as a married couple and a business partnership. The annual tour made stops in 180 cities within a nine-month period. The Blackmons were dubbed the “model couple” when they married in 2006.

The Blackmons have pursued a number of opportunities since their stint with Ebony Fashion Fair, including the launch of a clothing line and a publication, Inspiremagazine; spokesmodels for Spicy Wifey, an online lifestyle service for married women; and cofounder and vice president of Be You Foundation, which focuses on the self-esteem of young girls. “We still model. Ultimately that’s where we started, that’s what we enjoy, but we’ve been blessed to do other things that still circle around the modeling industry,” Tinika says.

Whether wearing the latest fashions or empowering the youth, The Blackmons continue to serve as brand ambassadors. Their representation for brands such as Ebony, Aaron’s Rental Company and The Atlanta Falcons is integrity-based.

Ronnel, a native of Akron, Ohio, and Tinika from Chattanooga, Tennessee, set out to define the term “model couple” as they reconciled the literal and figurative meanings of the term. “Not only did it set the tone of our relationship but also our business. How do we become model individuals and what does being a model convey to the audience? Who’s your audience?” Ronnel says, adding, “Everyone’s judging you; they’re critiquing you. They are trying to decide whether they want to be more like you or less like you.”

Tinika and a friend began speaking with high school students to ease their transition into college. The vice president of Livingstone College invited them to speak to the students at the chapel on campus. A club that was aware of Tinika’s modeling background impressed her with a theatrical routine. A meeting with the president started the ball rolling on her involvement with a fashion show on campus. The urgent buzz from Livingstone College led to a relationship being formed with The Blackmon’s company, More Than Me in 2010. “It started as a conversation and it escalated from that,” Tinika says.

Ronnel and Tinika revamped the familiar routine of the college’s fashion shows by morphing the worlds of haute couture and casual college fashion. Students transformed immediately after following rules which included no sweat suits, and no chewing gum in rehearsals. The Blackmon’s regarded the student participants as future leaders requiring a little bit of molding and mentorship. They offered the students the opportunity to do what the professional world of modeling won’t allow them to do regardless of body type. “We’re not necessarily looking for the next professional models. We just want to highlight who you are and give any type of pointers that we can that hopefully will further you on in the future in other endeavors,” Ronnel says.

Since 2010, the Blackmons, as cocreators of More Than Me LLC, have collaborated with Livingstone College’s students and staff to put on spectacular fashion shows that have become one of the highlights during the annual homecoming festivities. The team brought along longtime colleagues such as Ani KaShawn as the head of wardrobe. They meet with Livingstone’s media department, a resource that has been productive in pulling off the various elements of the show: lighting, audio, design, booking, theme.

The Blackmon’s offer talented designers the exposure to showcase their fashions without added expense. The opportunities for many of these talents to show their work outside of their local communities are infrequent. The designers have built relationships with students and colleagues. Returning designer-stylist Marco Hall of New York and designers Toney Powell and Tim Parks of TP2 and Isaac Spry of Atlanta have formed positive impressions on the students. “When you come into this atmosphere and I’m under protection mode because these students are under our care, there’s a certain aura that I want to keep,” Tinika added.

Those who attend this year’s show should expect the theatrics of a well-crafted production. The event will offer VIP treatments such as bright lights, photo ops in front of the step and repeat backdrop, media reporters and the red carpet. The past shows have empowered the crowd with thematic elements based on black excellence. This year’s theme will be just as uplifting.